Dropped in the Middle

One of our authors, Jeffrey C. Jacobs has written a piece on writing chapter summaries. You can read the original article here.

Sometimes what you need from a critique is just a middle chapter. We can help you, but we do need some context. For instance, why is Character A trying to talk to Character B. It helps us understand their interaction better when A and B are chatting because of something that happened in a previous chapter.

This is why chapter summaries are critical. Chapter summaries give us a sense of what has come before, what your characters have already experienced, and what they expect to have happen to them in the current scenes.

What’s more, when you start trying to sell your manuscript, agents and publishers will expect not just the first few pages, but also one or two word sentences that describe the major plot points for each of your chapters. Writing chapter summaries will help you with this. It’s excellent practice.

Also, if your work is part of a larger book series, you don’t per se need to give us what happened in prior books—you should expect people will pick up book 4 without having read 1–3 on a whim and that book should be just as good an entry as the three prior books.

However, what your summaries must convey is any information from the previous books that were conveyed in previous chapters. For instance, say Character A learned necromancy in Book 2. In book 4, we don’t need to know about that until Chapter 3, but if we start on chapter 14, and 14 assumes you know about the necromancy, which was restated in Chapter 3, then the Chapter 3 Summary should include this information. No need to give away the entire plot of Book 2, but if necromancy is important, that should be in your summary.

Folks, if you’re trying to spam this site with comments, please be aware, we use Akismet and will delete your comment before it is ever posted. What’s more, we delete it so that even the moderators don’t see it. You’re advertising to a black hole. You’re wasting your time.

You have been warned.

An image of Reston Town Center 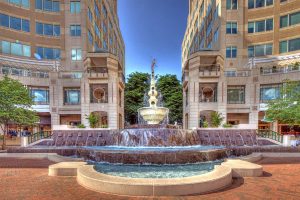 Unfortunately, WordPress doesn’t work with Apache2 to display images from the Uploads folder and even though the permissions and user/group settings are correct, there doesn’t seem any way to get WordPress to actually look in that folder for images!

Although I mostly write fiction, and all my published work is fiction, I also have a number of popular non-fiction blogs. The most popular of these is the Affordable Electric Car NOW! blog.

So why do I bring this up now? Well, sometimes you need to write something like a press release and although that’s not by any stretch my dream job, being a writer helps to make even these tasks structure correctly. Writing a press release is a lot like writing a blog entry, in that you form a pyramid of structure with the most salient facts first and drilling down into the details as you reach the most esoteric at the end.

So I hope you can join me this Saturday and next Saturday for a couple Drive Electric Week events hosted by yours truly, this local, Reston Writer.

Welcome to WordPress. This is your first post. Edit or delete it, then start blogging!

In case you’re new to the art of writing, let me introduce Duotrope.  Duotrope is an aggregator of various writing requests for submissions by assorted publishers and editors.  The site allows you to mark your favorites for later and sort the articles in terms of print vs. e-publishing, genre, length and payment as well as fiction, non-fiction and poetry. So for instance, if you’re looking for requests for a short story, fantasy piece comission you would search for a green circle with an F in the Genre column, and a cyan circle with an S in the length category.  You then click the link and read the editor’s description of what he or she would like to see.  If you feel you’re up to the task, you can then attemp to write a piece of that nature or, if not explicitly prohibited submit a prior work.  Just keep in mind resubmissions could get you in trouble, espicially if your submission has already been published.  For that reason it’s best to always try to write something new for the submission.

I, for one, am pursuing a non-for-profit horror short story.  But oh, I must admit this author is grossly out of practice with only 341 words so far of a piece idealy 10 times that. Oh, dear.

Posted in About Writing, Pitching your Work, Venders | Leave a comment

After attempting to negotiate a lease renewal for more than a year, Reston’s Barnes & Noble has decided to pull up stakes and leave the area.

Barnes & Noble will vacate the 25,000-square-foot Spectrum Center shopping center facility in February and it will sit empty for several months until the Container Store moves in next fall. The accompanying Starbucks café also will close with the bookstore, a Barnes & Noble spokesman said.

The vacancy will leave Reston without any retail venues to purchase new books. Books-a-Million in Plaza America closed last year.

Spectrum Center is owned by a group of investors that includes Lerner Enterprises.

According to Barnes & Noble, the bookstore bent over backwards in an attempt to be able to remain in Reston but Spectrum Centerâ€™s owners were unwilling to renew the lease.

â€œWe tried extremely hard to come to an agreement with the property owner to extend the lease at our Reston location, but despite our offering significant additional rent, the property owner was unwilling to agree to an extension,â€ said David Deason, vice president of development at Barnes & Noble.

But according to Spectrum Centerâ€™s owners, Barnes & Noble tried to get a rent reduction in their new lease and when they were told they were contractually obligated to pay a certain price, the bookstore decided instead to leave.

â€œThe fact is, when the time came, Barnes & Noble chose not to exercise its option to renew its lease at Spectrum. When we contacted them about their decision not to renew, they requested a reduction in the option rent as a condition of remaining,â€ the centerâ€™s owners said in a statement. â€œWe listened and engaged them in discussions for a period of more than one year, allowing them to remain in the space during such discussions despite the lease’s expiration. We obviously failed to reach an agreement. … The decision to leave at this time was made by Barnes & Noble, as they possessed the absolute right to remain at a fixed option rent that was well below market. We respect their business decision to make the choice that they apparently felt was the right approach for their company at this time.â€

Barnes & Noble did not comment on how many employees at the bookstore and cafÃ© would lose their jobs as a result of the storeâ€™s closing.

â€œIn light of their decision, we obviously had to make choices in order to preserve the vibrant retail environment at the Spectrum for the Reston community,â€ Spectrum Centerâ€™s owners said concerning contracting with the Container Store to take over the retail space.

The Container Store did not immediately return emails seeking comment.

This is vary sad given the Sterling Borders closed a few years ago but then again my guess is B&N will attempt to take that fallow space over since eastern Loudoun is as bereft of book shops as North-Western Fairfax.  For my Loudoun friends, is there any news on Ashburn?  Do you have a bookshop there yet?

A piece of flash fiction I’ve decided to publish under the Creative Commons license with attribution the only restriction.

What if the Earth could send us a message?  What would it look like?

Eviction Notice answers that question.  It’s a short story of about 1000 words and inspired by a writing prompt from the Loudoun County Writers Group.  The prompt asked us to write a story which begins with a ransom note.  Although the Earth’s message is more extortion than ransom, the story starts with this threat of global retaliation and proceeds to follow humanity’s flight from a planet that no longer wants it.

I tried to convey as much science as I could in the story, though I’ve aspired to be careful to place the science in a form which won’t put off the casual reader.  Rather, I hope that this story will inspire the reader to look up the various scientific ideas presented, like how long ago was it when the world had 4% less U238 or just what is epigenetics.

My inspiration are the early vignettes from the Ray Bradbury Martian Chronicles series.  As the story takes place over a 300+ year period, I try to paint it in broad strokes with each short paragraph explaining a new strategy for humanity and the difficulties it faced.

An update to the State of the Sphere!

TimeHorse goes into a bit of our new Read Aloud chapter and our sister group the Book and Essay Writers of Reston and Beyond.

Welcome to the Reston Writers Blog

Welcome to our blog :). Â We are a small, but dedicated group of writers located in the Northern Virginia area that meet on a weekly basis to discuss each other’s manuscripts. Â We hope that you will join us on our journey as we set out to explore the world of writing and publishing.